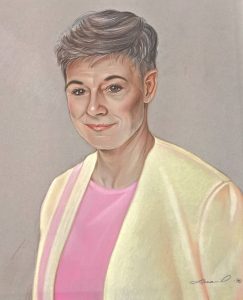 Founded in 1988, our mission is focused on non-discriminating, compassionate care to those in need. The purpose of Other Options, Inc. is to provide food, resources, services, and education to at-risk individuals and families with a focus on those affected HIV & AIDS.

The lack of services for people living with HIV and the need to receive specialized care, prompted Averil “Cookie” Arbuckle and others to form the first AIDS organization, AIDS Support Program, in Oklahoma in 1986. In 1987, the Governor’s Task Force on AIDS convened and asked Cookie to compile a directory which developed into the first “Aids for HIV/AIDS” handbook.

The formation of Other Options was prompted by the need to write another more comprehensive book. Chartered and registered in February 1989 allowed Cookie and her team to apply for and receive a grant from the Sarkeys Foundation for the 2nd edition of Aids for HIV/AIDS.

As HIV and AIDS prevention and treatment has evolved, Other Options, under the direction of Cookie’s daughter, Mary Arbuckle, has expanded its mission. Today, Other Options focuses on providing food, resources, services and education to at-risk individuals and Oklahomans living with HIV and AIDS. 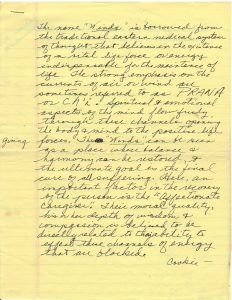 The name “Winds” is borrowed from the traditional eastern medical System of thought that believes in the existence of a vital life force or energy indispensable for the maintenance of life.  The strong emphasis on the currents of air or wind are sometimes referred to as PRANA prana (प्राण, prāṇa; the Sanskrit word for breath, “life force”, or “vital principle”) Five types of prana, collectively known as the five vāyus (“winds”), or Ch’i [Chinese qì, breath, air, spirit]In traditional Chinese medicine, the vital force or energy of life.  Spiritual and emotional aspects of the mind flow freely through these channels opening the body and the mind to the positive life-giving forces.  The “Winds” can be seen as a place where balance and harmony can be restored, and the ultimate goal is the final cure of all suffering.  Here is an important factor in the recovery of the person is the “Affectionate caregiver”!  Their moral quality his or her depth of wisdom and compassion is believed to be directly related to their ability to affect these channels of energy that are blocked.

Curtesy of Facebook post from Bennie Dowty
These pictures were at the Five who Care awards dinner (Aired Monday April 23, 1990) where Cookie had been selected as one of the recipients of the yearly award.  These were taken 20 years prior to her death on April 22, 1990.   Cookie spent countless hours writing a book of resources for people with AIDS.  She created Other Options which is still run by her daughter Mary Arbuckle to this day.

THE 9th annual 5 Who Care awards telecast that airs at 9 p.m. Monday on KOCO-TV (5) will honor award-winning volunteers.

Recipients of the award each receive $1,000 from 5 Alive plus an additional $1,000 donation to the organization of their choice.

They also receive the Jefferson Award from the American Institute of Public Service, a hand-painted portrait by 5 Alive artist Lisa Neil and are eligible for national recognition.

The 1990 5 Who Care winners are Norma and Charles Codding, Stillwater, who are referred to as professional volunteers; Pete Duncan, Bowlegs, a retired teacher and community volunteer; Averil “Cookie” Arbuckle, Bethany, author of “Aids of AIDS” handbook and founder of The Winds support home for AIDS patients; Patricia Gayle Morrison, Weatherford, co-founder of Ernie’s alcohol, tobacco and drug-free entertainment center for students; and Ellen Husky, Jet, the founder of “Hands On,” a program at the National Cowboy Hall of Fame. 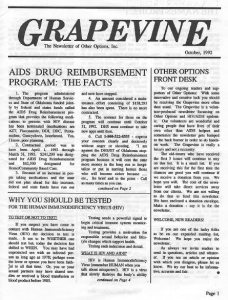 The Grapevine was the Other Options newsletter. The Grapevine ran a few years and was a labor love and a way to spread information to the community on HIV and AIDS.

This story is a celebration of the life of Jim Rogers, our beloved son. Born James Alan Rogers, July 10, 1959.

OUR SON HAS AIDS
A MOTHER’S PERSPECTIVE
THURSDAY, DAY ONE OCTOBER 1992

It started out like any other Thursday, doing the usual things around the house. I had a coupon for a free piece of pie with the purchase of one, and I have a good friend that I called to go and share some fun and splurge on pie. My sweet husband likes to have a special meal at home to eat all he wants, and this allows him that time unsupervised to pig out. My friend and I went and laughed and talked and had some girl time together which is a rare thing for me. My life is mostly full of men, having a husband, three grown sons and one grandson. We are also blessed with a wonderful daughter-in-law whom we all dearly love and treasure.

The doorbell rang later that evening and there stood Jim, our middle son, and his friend Mark. We were in the den relaxing and watching TV. Sam later said that when he looked through the door peep hole and saw Jim, he knew something was wrong. We began to talk, and he said he had something to share with us – he had been to the Doctor and had been diagnosed with full-blown AIDS. The Doctor had found Kaposy’s Sarcoma which is a rare form of cancer, in the roof of his mouth. He knew he had to tell us. I immediately put my arms around Jim and held him as he cried momentarily. He shared with us that he had been tested two and one-half years earlier and had tested HIV positive. He had kept that terrible secret to himself all this time to protect us from pain. No greater love could a child have than to suffer in silence to protect us! He asked that his brothers be called so that he could share this all at once. I called each son and said, “I need you to come now”. Since I had never done this, they each responded affirmatively, and we waited for their arrival.